Where Men Win Glory by John Krakauer tells the story of Pat Tillman, the all-pro football player who quit football and enlisted in the army after 9/11.

Great by Choice is Jim Collins’ book about sustainably successful companies and the characteristics of their leaders.

Both are about qualities of leaders. These two books couldn’t be more different on the surface – the Krakauer focuses on Tillman’s selfless, and virtuous approach to serving his country. The Collins book identified three other characteristics of sustainably great companies and their leaders: fanatic discipline, productive paranoia, and empirical creativity.

But there are obvious overlaps - connection to others, and service with a team or organization that is responding to a greater purpose.

This may be the secret to both. 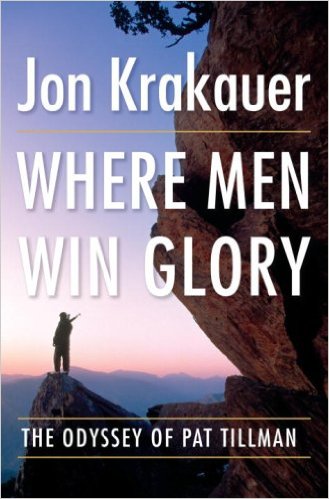 Tillman answered a call to duty. He felt the call to service to meet the purpose of supporting our country, which was dictated by his strong sense of virtue. He gave up a promising career in the NFL that was bringing him fortune and fame to commit himself to a greater purpose. For this service, he gave his life. He was a leader who placed the team (the country) in front of his own personal goals.

Leaders of sustainably great companies display discipline. So did Pat Tillman as a member of the elite Army Rangers.

Discipline is defined by Jim Collins as consistency of action. Moreover, discipline is characterized by the ability to maintain an independence of the mind. Those who have this quality will reject pressures that may cause others to conform in ways incompatible with values, purpose, performance standards and long-term aspirations. In other words, discipline is not regimentation or hierarchical obedience, but commitment to purpose and meaning.

The leaders he describes also are a bit paranoid, always trying to stay ahead. That includes planning for worst-case scenarios, even when things are going well. This healthy degree of paranoia is an important part of business and military success – always plan for the unexpected and be prepared.

They also applied empiric creativity – not copying others but discovering important lessons based on experimentation or their intuition.

Another element that typified these leaders was commitment to a long-term strategy – like Roald Amundsen, who was the first to successfully navigate across the Antarctic to the South Pole. He painstakingly planned, learned from experiences of others, including Eskimos. Amundsen’s expeditions had a lot of redundancy in supplies and wayfinding as part of his plan. He limited travel to 20 miles per day until reaching the pole and the same back. Even on days where his team could have done more, he stopped to maintain their strength for the eventual bad days. In contrast, Robert Falcon Scott, who was racing him to the pole, exhausted his team on the good days, planned poorly and did not display the discipline of Admundsen.

Admundsen’s party all made it back safely. Scott’s party died in the cold.

In both books, the foundation of the leader includes discipline, values, service, and predilection to action. These leaders were working to meet a higher cause.

However, Nietzsche notes that personal virtue as a driver has potential downsides:

“I love him who does not hold back one drop of spirit for himself, but wants to be entirely the spirit of his virtue: thus he strides over the bridge as spirit. I love him who makes his virtue his addiction and his catastrophe: for his virtue’s sake he wants to live on and to live no longer”.

I take this to mean that focus on personal virtues may not be predictably successful as team virtues – that is focusing on purpose or why of the team.

Leaders that do this are called level 5 leaders and these teams tend to better long-term than others.

Thus, the call to arms is clear for West Virginia. Strong leadership committed to a larger team purpose for others. A great team focused on a compelling purpose – the road ahead promises to be challenging and fun.