I recently had the pleasure of accompanying four outstanding medical students, along with Jim and John Brick, on their monthly pilgrimage to the Larry Joe Harless Community Center in Gilbert, West Virginia.

The real treat about the trip is that this community center was constructed by Buck Harless, a famous and altruistic West Virginian. The Brick brothers come monthly in respect to Mr. Harless, who was a coal baron and timberman from Gilbert. He has an American dream kind of story – orphaned and made it on his own. In middle school, he had a vision of success and was given the money by a local businessman to go to the World Fair. He told his aunt, who raised him, that he would become a millionaire by the time he was 21 years old.

But more so, he supported a town and its people, while offering hope to those who didn’t have the same opportunities.

The trip over from Charleston involved crossing Horse Pen Mountain. Jim Brick, the chair of the WVU Department of Medicine, told us the name came from the time Native Americans stole settlers’ horses and took them to the top of the mountain, where they were kept in pens, awaiting sale elsewhere.

We also drove through the town of Sara Ann, the place where Devil Anse Hatfield lived and is buried.  Jim also explained the four theories about the Hatfield and McCoy feud: about the relationship between a Hatfield boy and McCoy girl; over a stolen pig; over money generated from cutting down timber on the other’s property; and leftover from the Civil War.

A wonderful set of lessons and great stories about West Virginia. 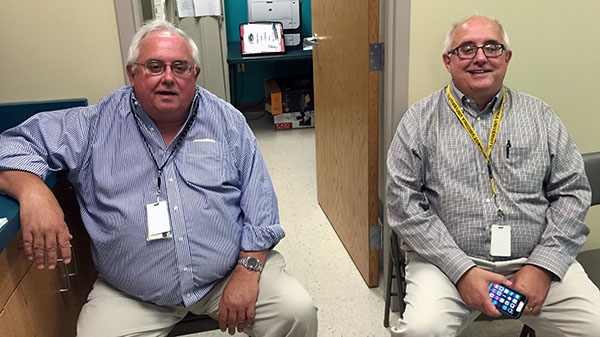 On the way to Gilbert, we passed through Logan County and Mud Fork, where my Dad grew up. It has been a long time since I have been through Logan, but much has remained the same.

This experience of hearing the stories of West Virginia, being with the Bricks and our students, and taking the step toward me being a practicing doctor in West Virginia – pretty heady stuff.