There are so many circles being closed for my family and me.

My dad, Don Marsh, the former editor of the Charleston Gazette, loved being called a “loose cannon” by the Daily Athenaeum and loved doing the Talkline radio show with Hoppy Kercheval. My mom and dad met at the Gazette, and she still lives in Charleston, in the house “that built me.” I was their first child to become a professional school graduate, followed by my brother Sam, a lawyer who is also a WVU graduate.

Gordon Gee, who signed my medical school diploma in 1985, was the president of The Ohio State University twice during my time there and is the person primarily responsible for recruiting me back to Morgantown.

Last month, I met some of my former classmates and teachers – and many other faculty members, staff, and students who are proud Mountaineers – at a welcoming ceremony in front of the Pylons, a set of four marble sculptures that mark the entrance to the Health Sciences building. The Pylons were outdoors when I was in medical school. Over the past few decades of growth and change at WVU, the building expanded around them; they’re now indoors.

Like the Pylons, while many things change, just as many things seem to be the same – the strength of the people, the University’s commitment to the state, and the vision and values of the leadership to elevate the University and the state. 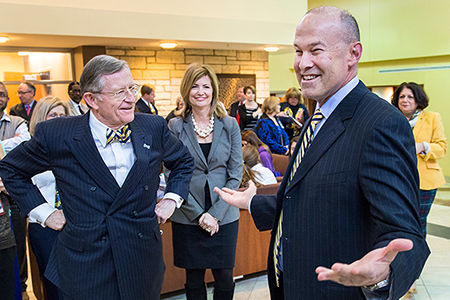 In working with Gordon Gee, I have found a leader who not only inspires me, but who is also one of the most experienced university presidents in American history. He describes himself as quirky. But he understands and communicates the value of standing strong for what you believe in. He sees the best in people, has a vision for excellence, and is committed to action. He is the right leader for WVU at the right time.

A whole stream of events issues from the decision, raising in one's favor all manner of unforeseen incidents and meetings and material assistance, which no man could have dreamed would have come his way. Whatever you can do, or dream you can do, begin it. I learned a deep respect for one of Goethe's couplets: “Boldness has genius, power, and magic in it. Begin it now.”

I want to build off what William Hutchison Murray said about mountaineering. Mountaineers are explorers and pioneers – never afraid to climb the highest mountain and plant a beacon for others to follow.

Let’s continue our journey together, today, to improve the health of the state’s citizens and change the world – together.